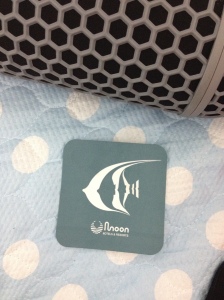 The Hotel Moon Beach in Yomitan is, compared to the island’s paradigmatic resort architecture, a relatively squat, tiered structure that shears across a crescent bay whose promontories curve lush; its interior a concrete tiki without the clutter, all falling fronds, hardwoods, ceiling recesses, pools and sliding glass and tasteful tropicalismo from the airy shop. The hotel’s diagonals shield its guests from the concrete greys of the road outside, orientating views seaward across the raked white sands to the lighter, greener blue before the ocean darkens over the reef. The restaurant windows – and presumably the more expensive rooms – frame this scene.

The heavens have opened to hose rain off the flood-lit palm trees. My resolve to not fish for sound evaporates like the morning rain two days ago in Naha. Quickly I connect the microphone lying on the bed to the recorder and step outside. Barks and voices, windows being shut, lighting flashes, rain still whistles down, drips onto the bars of the grating. Something whines throughout in the headphones – a fading battery? Thunder tears sudden and I can’t stop myself counting. Twelve minutes later I wonder if a metal fire escape is the safest place to record an electrical storm.