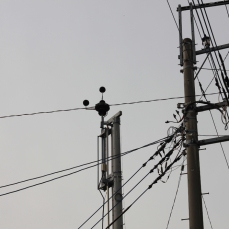 We spent time visiting some of the sound pressure level devices which follow the principal paths of the planes from the sky to the ground. Hoisted up on hollow metal poles and normally encased in a weather-proofed foam housing, there are 102 of these monitoring systems distributed around Narita. Cables from the devices attached to the poles snake downwards into a metal shed (or convenient building) containing a display monitor, computer processors and power. Venturing into the shed is to be confronted by the steady hum of circuitry doing its work. Apparently, the 102 monitoring devices compare to 7 located in the vicinity of Heathrow. According to Hayashi-san, the monitors belong to three different organisations, Narita City, the Narita Airport Authority and a private monitoring company. Each system is different in its operation. The NAA system, for example, uses a transponder-based mechanism which only activates in response to the detection of an incoming aircraft. As I understand it, other systems use the onset of sound above a particular amplitude to activate the system while still others, like the system Matsui installed around the farm, register perpetual variations of sound.

Professor Hiramatsu garnered us a meeting with one of the companies that manufactures and installs some of the monitoring equipment, Niitobo. They brought a sophisticated piece of measuring apparatus called NoiseVision to the farm. This device, resembling something from the set of a science-fiction film, takes the form of a basket-ball-sized black sphere, intended with microphones that simultaneously register 360-degrees of sound from its 32 individual sensors. The ball, mounted on a dedicated tripod, feeds its data down thick cables to a large blue metal box which, in its turn, uses a conventional laptop to monitor its progress. The system has a number of uses. It is employed in engineering settings to detect noise leakages in, for example, vehicles. It has also been used in domestic homes to analyse sound-proofing. This was the first time it had been deployed in an outdoor setting and, of course, in such close proximity to unshielded noise. The system was set-up in the ‘haka’, the bamboo grove where the graves of the protestors are placed (where we once saw a sombre official from the Narita Airport Authority placing fresh flowers and the ritual offerings of cans of tea and bottles of water). To see such a hi-tech arrangement encountering the walls of bamboo that surround the graves with their long wooden stakes bearing the name of the dead, was truly bizarre.

One of the things that makes the NoiseVision system different is suggested by its name. Rather than just spit out arrays of numerical data, the calibrated instrument also produces a video image of the noise. This takes the form of an output in someways similar to thermal imaging: a background out of which gradations of foreground appear, with different colours representing different intensities. The device doesn’t just narrow down to one perspectival frame but draws in the whole surrounding scene simultaneoulsy. The company have agreed to donate the ‘footage’ captured in the grove to Rupert and I for use in the installation. Once we’ve resolved how to turn what amounts to a surround film into something that fits on a linear timeline, we can see great potential for this. For one thing, obviously, it provides a graphic account of the movement of sound in space. For another, it is a nice visual short-hand for the different systems of measuring sound that have grown up around issues of noise. Finally, it makes an interesting parallel both to our re-projection of sequences of protest documentaries onto the walls of the bamboo grove and makes an oblique reference to the video mixer that features in Chris Marker’s Sans Soleil. This is Golden Week in Japan, a long national holiday, but once that is over, and once the computers have done their processing work, we should be getting a sequence from Niitobo to use in the film element in the exhibition. Of course, the potential for this product in the real world health situations of those exposed to unwanted sound is of considerably greater worth since it provides a legible representation of what, as pure numbers and rival metrics, might seem arcane. Still, for us, there might be a rather special fix here for our creative needs.

This will be my last post for a while with my Japan internet connection coming to an end. I cannot wait to see my wife, my children and my friends. It feels like this has been a long stretch. We may not have undergone the immersive intensity of living on the farm this time but we have been rewarded with something different: a chance to contextualise our work in broader frames and, by talking about what we have done so far and showing the results, we have also ourselves been contextualised, especially in what Shimamura-san and Fujiko-san had to say about our efforts. Although I was frequently the butt of his jokes and although more than one delicate recording was marred by him wandering close and firing off a few photographs, I will miss Hayashi-san, without whom we would never have had the opportunity to work on the farm, nor draw upon the broader noise-health picture, nor eat so very well, nor be kept in such vibrant spirits, nor (frankly) have avoided arrest.

We have had a unique experience on the fieldwork element of this Wellcome Trust-funded project and I feel genuinely inspired by how the farmers have chosen to live their lives. That inspiration will be something that stays close to me for a long time. In more practical terms, what happens now, I guess, involves turning that inspiration (and its implications) into something conveyed in a gallery setting.
When I get the chance, I’ll continue to posting about our progress here. Thanks to everyone who has emailed about this blog over this last eight months. Your encouragement has been a strength and your criticisms invaluable (well … maybe not all your criticisms).

As we drove into the farm for the very last time this evening, dusk just beginning to fall, we startled the cock pheasant out of the long grass. To have finally witnessed, in a flash of proud iridescence, this bird that we had heard so often but never managed to see, felt an auspicious omen.