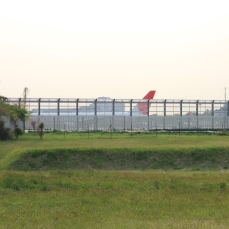 We are not able to live in the farm buildings this year. It would have been too much to expect, given the pressure of the current circumstances on everyone here – particularly the continued aftershocks. Our solution has been to book into the very closest hotel, a 10 minute walk away from the farm itself, and to travel there everyday, varying our arrival and departure times so that we are again able to experience the dawn moving to the dusk and beyond.

Being welcomed into the Shimamuras kitchen again was a warm moment. For once, the aircraft seemed to have paused for breath and I could hear the ticking regularity of a clock on the wall, the water boiling on the stove, the crunch of our rice cakes, the sliding glass on the wooden cabinet. Not being able to speak Japanese, I can find it awkward to be the only person not contributing to a conversation. But as Hayashi-san, Professor Hiramatsu and Rupert caught up on the farmers’ news, I was happy just to sit and watch and listen.

As Shimamura-san, Fujiko-san and the two grown up sons prepared to go back into the fields, the rest of us walked down towards the shrines, talking about our plans for the work of the next immediate days. Right at the bottom of the farm, next to the bamboo grove that encloses the shrines, close by the green blast wall and the reinforced glass screen (glass as a small concession to the fact that a farm needs light to fall on its fields to function), we saw the protestors’ building, a remnant from the fierce days of struggle. Last year, its corrugated walls were claimed by ivy or knotweed, softening its silhouette. Now, earlier in the vegetation’s growth cycle, the structure was laid bare – “more skeletal” as Rupert rightly had it. Apparently, the forlorn construction is still occasionally inhabited by one of the protesting splinter groups. To be inside those thin walls, buffeted by noise and shaken by pressure waves, only metres away from the taxiing jet engines, would be an unyielding torment.

In these photographs, on the left of the building you can see the remains of one of the towers the protestors hoisted up into the air in an effort to disrupt the ability of the jets to take off and land. This tower – or its near neighbour – was the one on which the protestors were dwarfed by that 747 jumbo jet in Takashi Hamaguchi’s photographs described in the previous post.