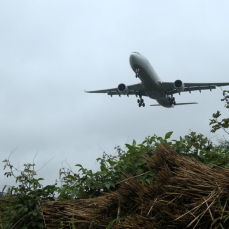 Plane coming in over farm 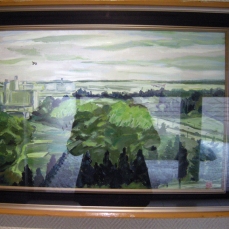 Viewed from a particular angle, the historical shape of certain human activities appears to have been formed to blunt the sharpness of the seasons. Developments in shelter and clothing evidently find themselves contributing to that profile; and refrigeration, too, allows the nutritional value of foodstuffs to persist beyond the point of harvest without having recourse to pickling, salting or drying. Refrigerated transport extends the reach of this process so that, in the UK at least, the appearance of food on supermarket shelves bears little relation to the seasonal growth cycles of our northern, maritime climate. Of course, there are also those who attempt to persuade a return to a more acutely seasonal life – and not just with reference to food – and the Shimamuras’ advocacy of the principles of the Slow Life movement can be understood in this context.

For all of our technologies, however, there are moments when seasonal change can suddenly reveal itself. As I stepped down from the bus in Narita City, the roadside electricity lines above me were mobbed with starlings. The sight and sound of these birds took me abruptly back to my home town of Brighton where, as the sun drops back down towards the equator and the days start to shorten and darken, large flocks of starlings mass together after their long flights south across sea and land. At a distance, the starling’s plumage appears to lack life and lustre but from a closer vantage, white speckles come into focus, flashes of red dart from their legs and spots of brown show at their wing-tips. When winter turns to spring, the reds, blacks and browns are joined by the iridescent sparkle of purple and green, by the bright yellow of the beak and – beyond our human sight – by hues in the ultraviolet spectrum. The yew tree in one of my neighbours’ back gardens plays host to groups of starlings clicking, fizzing and squeaking away. Hearing their Japanese cousins bringing their own dialect to a similar repertoire of sounds, I wondered where these birds had come from and wondered, too, whether my children back home had spotted the starlings and saw them as a sign of the coming autumn.

Does it ever make sense to think of air-flight as participating in this struggle against the seasons? Commuting up to London past Gatwick Airport I am often struck by the sight of holiday-makers leaving behind the winter rains in search of beaches and sunlight and by those others who struggle with skis and snowboards in transit to a climate more conducive to their hobbies. I wonder, for example, if perishable foodstuffs are ever freighted by air? I wonder, too, whether a globally-warmed planet is a planet where the edges of the seasons are blurred ones and question where the impact of air travel finds its place in the that process? These are questions that I feel drawn to pursuing further, even if the answers can find no eventual home in what comes from the speakers or the screens of “Air Pressure”.

Standing by the roadside in Narita City, listening to the starlings’ whistling gregariousness and watching a 777 jet climb into the distance, I also realise I need to find out more about the economic relationships that bind Narita to the airport. Having left the farm for one of the huge international hotels that follow the Shin-Kuko Expressway westwards from the city towards the airport, past the many hectares of concrete given over to parking spaces in which air passengers leave their cars, that relationship seems a very substantial one. As I walk alongside the Nakadai sports fields and then into the city centre, I breach an invisible boundary between an urban settlement that feels familiarly Japanese into a zone temporarily populated by more non-Japanese than in any other part of these islands that I’ve previously visited – more even than in the strongest tourist-magnets of Tokyo and Kyoto. I’m reading the Tourist Map of Narita which identifies the airport as another attraction alongside the Toshoji Temple, the Calligraphy Museum, the Naritasan Shinshoji Temple and the Sanrizuka Goryo Bokujo Kinenkan Museum (the latter is the Imperial Household Ranch Museum I talked about in an earlier post, which I now discover represents a kind of memorial to the Imperial Pasture itself which was ceremonially moved after 100 years in Sanrizuka away to Tochigi Prefecture “in order to construct Narita Airport”). According to this foldable brochure, even seven years ago the airport was handling over 500 flights a day, bringing an annual 30,000,000 passengers from 90 cities of 36 countries.

I want to dig a little deeper into the kind of information that can place the farm and the airport within wider contextual frames – like the ecological and economic ones I have been considering here. But I am also conscious of the hazards involved in bringing those frames too sharply into focus. This is not just an issue of the potential aesthetic awkwardness of inert information but, more importantly, is about the dangers of diminishing the particularities of situation, of being distracted away from the singular circumstances of the farm in Toho.