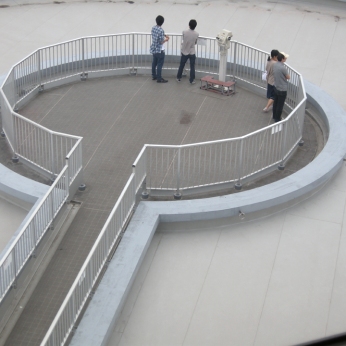 Model of runways at Aeronautical Musuem (without farm)

The Museum of Aeronautical Sciences is located just off Route 296 at the other end of Runway A to the Cherry Blossom Hill observation point. The exterior of the museum building approaches the kind of contemporary architecture liable to be associated with a science park or university campus, where the instruments and devices of International Style – steel, concrete, glass walls, flat roofs, emphasis on unbroken interior volume – have been bent into softer shape through the use of curves. Two large drums squash towards one another, crowding a smaller, central cylinder that is bisected by a tubular awning. Rising behind the three merging drums, a forty metre high pipe is capped by a glass and steel sleeve, alluding to the classical form of the 20th century conning tower.

Passing under the canopy awning, through the reception area and into the exhibition halls stages an entry into a world that is held in complex balance. Much of the gallery spaces are devoted to justifying the title of the institution, addressing some of the broad sweep of the science of flight within an historical context. There is that curious mixture, common to many museums of comparably modest ambitions, of a slightly old-fashioned display and instruct approach combined with interactive multimedia kiosks. There are reconstructions of planes, such as the wooden strut and canvas winged biplane where the pilot lay open to the elements next to a brass fuel tank for the first Japanese-manned airflight; there are displays in which eminent professors, portrayed in oils, have selected the 50 most important Japanese planes; information boards about jet propulsion; aircraft wheels, turbines, cross-sections of wings for you to stand next to and appreciate the scale of the enterprise; collections of paraphernalia, like BOAC flight bags and promotional posters from different air companies; cut-off cockpit sections of aircraft that you can clamber into (a Mitsubishi A6M Zero Sen was my choice); there is even the world’s largest scale model, a 1:8 Boeing 747 whose aerilons, elevators and flaps can be operated from a cockpit simulator (although this was not working on my visit).

Against this densely detailed backdrop, the Museum of Aeronautical Sciences attempts to engage some of the more critical realities of contemporary air flight, the ecological dimensions of air travel and, in an oblique way, Narita Airport itself. The second floor of the East Wing is where the visitor is vaccinated against these potentially painful problems. In its performance of this procedure, the Museum finds itself inhabiting some of the same thematic territory that the “Air Pressure” project has been inhabiting this past while. The Sound Experience Room, for example, provides an opportunity for the visitor to enter an acoustically-proofed room, close the door (whose handle-mechanism appears modelled on that of a flight door) and get a sense of the volume and character of aircraft noise, from the perspective of an individual on the ground (the relationships graphically marked out in an accessible cartoon style). The design of the Experience Room, the effort of closing the door, the LEDs purportedly monitoring dBA levels and the calm instructional tone throughout suggest some kind of ‘ecological validity’, some sense that this experience represents with a degree of educational truth what actually happens out there, a few 100 metres away. But I would be surprised if someone who had stood leaning against the aluminium barrier of the exterior observation platform before arriving at this part of the exhibition would be convinced. For me, the Sound Experience Room delivers a mere shadow of the actual the realities of the impact of aircraft noise on a proximate environment. Part of this has to do with the speakers that deliver sound for the kiosk system in the booth which have a very narrow cast, sounding noticeably flat in both the upper and lower frequency registers. Part of this relates to the apparent disjuncture between the dBA meter and any truer calibrated measurement. Sitting quietly insulated against all external noise, the meters already up in the 60s and yet once the samples of aircraft noise kick in, the levels are only climbing up to 65 dBA. So, the ‘resting level’ is considerably higher than it should be (it should probably be closer to the region of 20 – 30 dBA) and the system as it is presented seems very sluggish in responding to the onset of aircrat noise, which even at the 200, 400 and 600 metre distances which are being represented should get into the 70s at the very least, if not the 80s. Another issue, talked about in previous posts, is that the Sound Experience Room focuses on the topical moment of take-off and touch-down side of the equation, rather than grating persistence of taxiing sounds.

In the Eco-Airport Zone more speakers are deployed in the exhibition, this time to address areas of biophonic world. My understanding of the displays, which involve photographs of insects and birds – including the skylark mentioned by Shimamura-San – complete with isolated clean recordings of each of these, activated at the push of a button but also contributing to an ambient soundtrack was that these were sounding lifeforms which shared the soundscape with the aircraft, petrol tankers, alert sirens and traffic drawn to the airport. It is undeniable that some of these creatures do continue to sound in the immediate environment of the airport. Yet there is an ideologically-charged operation, irrespective of any deliberate intentions, since to isolate these sounds from their continual interaction with the wider soundscape of the aircraft – even illustratively – is to misrepresent what is going on.

It will be important to conduct further research into the relationship between the aircraft and ancillary airport sounds and animal life. Part of this might involve thinking through Bernie Krauss’s niche hypothesis and whether the totality of airport sounds crowd out important animal signalling frequencies, part of it may need to consider whether any sound, whatever its qualities, may expel particular animals from the vicinity (a splash which might send ripples through the food-chain) and part of it might need to zoom back from sound to consider how the artificial light from the airport may affect sleeping, feeding and hunting patterns.

One thing which is not in the Museum of Aeronautical Science, even in the NAA (Narita International Airport) Zone, is an accommodation of the history of protest here (in the 60s and 70s) or of the continued struggles by the two remaining farmsteaders to hold onto their homes and livelihoods. Indeed, if you look at one of the photographs above you can see an empty space in the model of the airport just below the large letterforms 34R on Runway B. That empty space is the Shimamura farm.