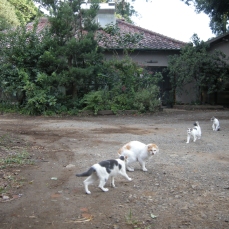 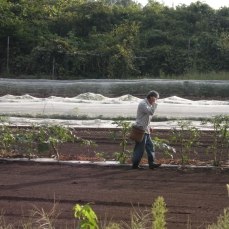 Looking towards the Egg House

Over the weekend, Mr. Shimamura and Mrs. Shimamura found the time for Rupert, Matsui and I to explain more about our project. Professor Kozo Hiramatsu, the Director of the London branch of the Japan Society for the Promotion of Science and another significant contributor to “Air Pressure”, had already met Shimamura-San several times before. Indeed, it was Hiramatsu taking Rupert to this special place in the late Spring of this year that allowed us to crystallise some of the methodological approaches we are using and allowed us to contextualise the farm in Toho within wider debates around acoustics, environmental health and the wider history of modern Japan. Crucially, doing any work in Japan – scientific, social scientific or artistic – depends on the development of relationships and Hiramatsu has also facilitated these for us all in vital way.

We played the Shimamuras some of the footage and some of the audio recordings we had made and discussed how our expectations about how this material could be made to live and breathe at the Whitworth Gallery in Manchester. Sometimes, as when I’m standing in swaying, seedy grass stalks pointing a large parabolic reflector dish up into a sweet chestnut tree or when I’m just sitting apparently doing nothing on the old wooden and iron trailer with deflated tires, or as when Rupert is bending over in the early morning field with his camera aimed at one of the sons picking okra, I feel particularly conscious that we must cast a strange shadow. Welcoming the Shimamuras into what is after all their room – but a room we had transformed into a kind of anti-control tower, where we get the close passing planes but none of the triple-glazed green glass and where instead of radars, we have banks of microphones, film and still cameras, laptops and all of Matsui’s measuring devices – raised that sense of dislocation to a higher pitch. But Rupert had given the Shimamuras one of my previous CD releases – the Gruenrekorder album “Some Memories of Bamboo” – when he and Hiramatsu were explaining our project to them back in May. And, much more importantly, they and their sons – their daughter is an aid worker in Africa – are clearly very much engaged in the world. And strangeness is something against which this strange place must provide you with a daily inoculation.

I left our talk with the Shimamuras shining with excitement at this project’s potential. I felt that they had helped me break through some threshold that had to be crossed between Rupert initiating this project all those months ago and us delivering something of which we could be proud. I’ve just sat down with Rupert to find a way to articulate what was so inspiring about that meeting. We shared a Yebisu beer. Yebisu it turns out is the name that the Japanese gave to the direction from which the first strangers came to arrive on their shores, edged with a sharp notion of strangers as gods.

It was perhaps a lack of my appreciation of the strangeness of the situation that the Shimamuras find themselves in that led to us asking if they could find a way to distinguish between the contesting sounds that constitute the soundscape they both inhabit and participate in. Such is the absence of any possible coherence here – the “mess” I talked about in that post on insects – that even the language of “a soundscape” crumbles into dust. And such is the intensity with which that incoherence is delivered that Mr. Shimamura responded to this line of questioning with “I cannot hear any more”. I guess he was not so much making a physiological claim as a more profound philosophical one – he cannot hear the sounds that give his life relevance.

Rupert made the point that on this organic farm, from even the six days we have been here so far, it is clearly evident that the family have a physical and emotional affinity to the land and each other as they engage in its collective cultivation. This is an affinity that is deepened by the five decades of history of protest involved in attempting to protect this land, by Shimamura’s father being one of those who returned from the destruction of the war to create something that could be sustainably theirs and by the current generations investment involved in its organic status.

And yet is an affinity which cannot be experienced through the sensory register of hearing. Long gone are the days that Mr. Shimamura recalled farmers’ voices carrying from one farm to another. Disappeared, too, are his remembered moments of “the natural sounds that were the sounds of the forests that were here before”: pausing to hear a skylark rising in singing spirals, a brown owl calling out, a civet chattering in the undergrowth. “You cannot run away from the noise, you cannot get used to the noise. With the change of seasons, the sounds no longer change. I believe the birds feel the same way”.

The inability to distinguish sounds with clarity – and for those sounds to find a way to come and go as the spinning earth tilts in relation to the sun – is all tied up with Narita airport and the way that it has disorganised the acoustic ecology, made coherence an impossibility.

I’m still holding onto that initial elation, still animated by the potential of this collaboration. This spot, its inhabitants and the material we gather here are what counts. Material not only as the recordings and the film but also the stories we can gather, the science Matsui and Hiramatsu can bring, and those parts of the world that are opened to senses.